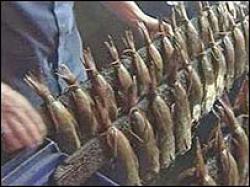 The Arbroath Smokie is a smoked haddock. But not any old smoked haddock  not one of those day-glo, yellow efforts, stained with a rather contrived dye and languishing on the ice in the supermarket. No, the Arbroath Smokie is golden brown, hot-smoked on sticks over whisky barrels filled with beech and oak chips. It falls apart into easy, salty morsels of intense flavour. It is also quintessentially Scottish; a rather dowdy fish made stellar by traditional smoking techniques. In the new age of gastronomic enlightenment, the Smokies are enjoying a profile so high that taste-making luminaries like Nigel Slater and Gary Rhodes have lost their heart to them.
The Arbroath Smokie hails from the village of Auchmithie, just north of Arbroath , on Scotlands north-eastern coast. Like all good local produce, it has a bit of a story to tell. The most hoary of the old fables tells the story of a woman returning to her Auchmithie cottage, only to find it burned to the ground. Amidst the smoldering ruins it was said that the woman recovered some of the haddock that her family were drying, and thus chanced upon the first Smokie.

It is fanciful of course; the Smokies evolution, like a lot of Scotlands cuisine  the haggis for instance  undoubtedly takes a degree of influence from Scandinavia. The Nordic influence in Scottish cuisine can certainly be found in the Scots propensity to preserve meat, fish, and game by smoking as opposed to the dry curing of meats so favoured by Spain and Italy. Even the haggis was influenced by Scandinavia  traditional fare in the Arctic Circle would naturally be popular in the harsh Scottish climate. Although the Smokies were technically established in Auchtmithie, as Arbroath grew as one of the most notable fishing towns in Scotlands north east, Auchmities population of fishermen made the short journey to Arbroath, and making a hard earned living on the North Seas fishing fleet.

The haddock is not native only to Scotland; its just that the Scots have rather taken to this unassuming member of the cod family. It seems the Scots see something in the haddock that they can identify with. The haddock is smaller than the cod, and it enjoys a more modest public profile. It is, or rather was, plentiful. And it was economical; a cheap way to feed the family with a healthy serving of fish. Some of Scotlands most traditional foodstuffs have been fashioned from the haddie.

Of these there is the Cullen Skink, a soup made from smoked haddock, milk, cream, potato and onion. Its a pungent, heartwarming offering and a true delicacy. Then there are traditional Scottish fish cakes  for there was once a time when salmon wasnt farmed and the haddock was more affordable for the average Scottish family. But it is the Arbroath Smokie that brings out the best in the haddock, and in turn displays all that is good about Scottish cuisine. A simple, pragmatic dish, produced faithfully to an age-old recipe.

In the 21st Century, it is Iain Spink who is sustaining the Arbroath Smokies profile through relentless promotion of their delights, and by virtue of running an award winning family business, whose history stretches back to the Smokies inception. Spink has even appeared on television; he was made a Food Hero by UKTV Food, and was nominated Best UK Food Producer 2006 by BBC Radio. Spink smokes other fish  trout and mackerel for instance  yet the smokie is most famous, earning a Protected Geographical Indication, meaning that production of the Smokie is the preserve of Arbroaths, and Arbroaths alone.