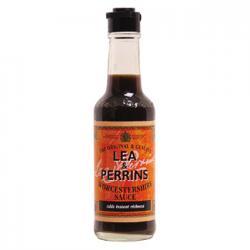 The near universal condiment that is Worcestershire sauce is most definitely a British food legend, though its inspiration was, it is said, Indian, and its ingredients from around the world: anchovies from the Mediterranean; chillies from South America; molasses from the West Indies; and tamarind paste from the Indian sub-continent, among many others.
There is a lovely story to go with the product, which may or may not be true, but certainly bears repetition. A British colonial bigwig returned from India to Worcester in the 1830s, and soon missed the strongly flavoured and spicy foods that had been available to him there. This figure is supposed to be Lord Sandys, who took the general recipe for a version of a curry sauce to Messrs Lea and Perrins of Broad Street in Worcester, chemists of some repute in the city.
Lea and Perrins duly made up the concoction as best they could, but the resulting product was harsh and rather unpalatable, and they relegated the barrel to their cellar. Clearing the cellar a couple of years later to make room they tried the product again and were astounded that its flavour had rounded, and the aroma was pleasantly savoury. They had a winner on their hands. In 1897 their company moved to new premises in Midland Road in the city, where they had railway access to cope with the large volumes they shipped out daily.
The original sauce has been copied by many, and as well as being found in kitchen cupboards in this country is to be seen on restaurant tables from the USA to Asia.
An ingredient in the classic Bloody Mary it is part of drinks culture worldwide, its properties also recognized by the inimitable Jeeves, who uses it in a remedy of his own devising to save Bertie Wooster's life - or at least cure his hangover - on their first meeting. It has saved many a gravy from mediocrity, rendered curries more complex, and beefed up steaks lacking in oomph from San Francisco to Sydney. It is used in marinades for fish and as a boost to beers in South America. Which all proves that Britain has made a contribution to world cuisine beyond the fish finger