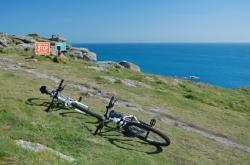 Self-powered travel on two wheels has captured our imagination since the invention of the bicycle in the 19th century. Even in those early days the bicycle was used as much for the pursuit of leisure as it was for basic transport. Right from the very start, people have been unable to resist the urge to see who can go fastest, or furthest, on two wheels. The profile of cycling in Britain has risen enormously due to the success of the GB Cycling team at the Beijing Olympics. Todays bicycling comes in many different flavours, from gentle rides around quiet country lanes to extreme downhill mountain biking. The UK has cycling clubs in almost every town and city and it doesnt matter whether you prefer on or off road cycling, theres a club or organisation near at hand. You dont even have to go outside to ride a bike, you can even enjoy your cycling at an indoor velodrome. And dont forget BMX and stunt riding which has been enjoying a resurgence. As with any sport as old and established as cycling theres a wealth of resources, facilities and equipment suppliers spread all over the country. The explosive growth of off road cycling has seen a number of mountain biking and downhill riding courses cropping up everywhere, including even in city centres

Other Activities in Glasgow