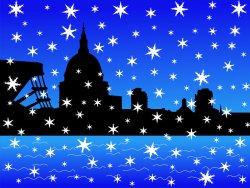 It was always said of him, that he knew how to keep Christmas well, if any man alive possessed the knowledge. May that be truly said of us!
Scrooge learned how to enjoy Christmas, but the capitals shops, markets and theatres have taken it further. A trip to London in December can clear seasonal shopping in one fell swoop; take in panto, play and pictures; and simultaneously doff the cap towards the man who more than any other made the British Christmas, Charles Dickens.

Oxford Street has to be the starting point for Christmas shoppers: Selfridges, John Lewis, House of Fraser, Debenhams... Department store central. There are more than 300 shops along the mile-and-a-half of Oxford Street, and even if you dont buy anything you can enjoy the famous lights, and those of adjoining Regents Street which has some equally enticing emporia to solve your present problems. Or head for Knightsbridge to explore Harrods and Harvey Nicks. If they havent got it, then it probably doesnt exist.
A bit more Dickensian perhaps are the capitals many Christmas markets: Camden Lock and Carnaby Street, Clapham Farmers Market and Covent Garden to name but four.

This year the Oxford Street lights are suitably Dickensian, taking A Christmas Carol as their theme: catch the new 3D movie in one of Leicester Squares cinemas; or see Gareth Hale on stage at the Arts Theatre there as Scrooge in a musical version of the same piece. For a truly traditional rendition of highlights from Dickens most famous tale The Dickens Museum in Doughty Street (the only remaining Dickens home in London) has readings (with limited places) on December 20, 21, and 22.

Of course equally traditional are our Christmas pantos  Oh no theyre not, oh yes they are - to which much of theatre-land is dedicated through December: Aladdin at the Hackney Empire, Peter Pan at the O2, Mother Goose at the Greenwich, Sleeping Beauty at the Shaw just a few of the productions on offer. Take a foreign guest and enjoy them trying to understand why the principal boy is a girl with two men in drag opposing him/her, and how come the audience knows its lines as well as the actors do. The Snowman is a more recent and truly magical addition to the Christmas cannon, and a stage production is to be found this year at The Peacock Theatre in Portugal Street. But dont forget to buy your tickets in advance to save disappointment on the day!