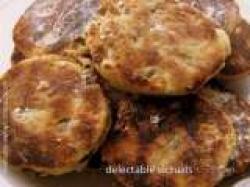 This little biscuit from the south of Anglesey must be one of the easiest things in the pastry cook's repertoire, the only ingredients flour, butter and sugar in the ratio 3:2:1, though a little milk may be needed if the dough produced is hard to work.
What is more interesting about them is their traditional shape, moulded in a scallop shell (though these days simple round biscuits with lines etched in them to imitate the markings on a scallop shell are more likely to be seen). There are two explanations for the choice of the shape: one links them to the pilgrimage to Santiago de Compostela in Spain, whose pilgrims wear a scallop shell to denote their quest. The other is far more romantic, a legend that once a Welsh Prince was holding his court in Aberffraw (not too unlikely, the place also hosted the Eisteddfod in the distant past), and his wife was walking on the beach there, and spotting a pretty scallop shell asked for a cake to be baked in the same form.
The biscuit itself is maybe not the most inspiring of confections, but it may be served with a dollop of thick cream and some raspberry jam, a Welsh take on Devonshire's great delicacy, which would make it far more worthwhile hunting out a baker who makes them - or more simply baking some yourself.