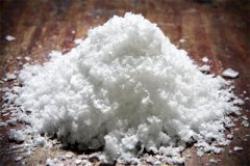 The area of Essex around the Blackwater Estuary has been involved in making salt for many hundreds of years, indeed the very word Blackwater may be derived from brack-water, or salty water. Local legend has it that a Roman commander's saltwater bath was left heating for too long, and when he finally got to it salt crystals had begun to form in the bottom, showing how the salt could be extracted from the local seawater. In the Domesday Book 45 salt pans are cited in the area around Maldon, and three centuries later the industry was significant enough, and organised enough, to form a guild.
Today only one company is left making Maldon Salt, as the method is not suited to huge industrial production, being inherently more expensive than the way salt is made in the traditional Cheshire industry. The method is deceptively simple, however: the Maldon Marshes are at their most saline at certain tidal periods, when the weather has been warm; water is drawn from them, allowed to settle out, then filtered to remove impurities; this water is then heated in large salt pans, but the heat required is varied according to the phase in the crystallization of the salt; the delicate crystals thus formed sink to the bottom of the water, just as they did 2,000 years ago for the Roman dignitary, and are raked out with long wooden implements; the crystals are then drained and dried until they are ready for sale.
Why is Maldon salt special? There are several reasons: the crystal form is different from the form produced via the salt mining route - Maldon salt has a pyramid form, is flaky, and breaks down beneath the fingers very easily. Maldon also tastes salty - it sounds stupid but it does, and so less is needed to satisfy the taste buds, no bad thing as wonderful though salt is, over-indulgence has serious downsides. Maldon salt has a tang of the sea about it, perhaps because of the trace elements - magnesium sulphate, potassium chloride, and calcium sulphate among them - that remain after it is processed, and it doesn't have the bitterness of rock salt. Neither does Maldon have any additives, as its fineness negates the need for flow-improvers.
It is strange to say so, but Maldon salt has an elegance others lack, in its fineness, in the uniqueness of its crystal form, and in its flavour. And it is a precious resource that should be even better known worldwide - if it were French they would use no other and delight in telling us all about it at every end and turn. Sel la vie, as it were...