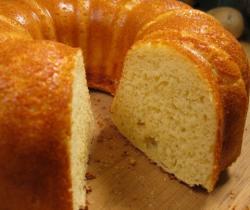 There is a wonderful web of inter-connected stories about the origins of the Sally Lunn, the original Bath bun, and no way to sort the fact from the fiction. But why let truth get in the way of a good story?
The most charming version of the bun's introduction to Bath is that of Solange Luyon, a pretty Huguenot refugee who ended up in the city, at first hawking the baked goods of others in the streets, but when it was discovered what a light touch she had in the kitchen ending up baking her own special breakfast bun. Her name much corrupted became Sally Lunn. This legend is enhanced further by her supposed association with what is known as Sally Lunn's House , said to be the oldest house in Bath (though this as might be expected in a city of such antiquity is disputed), dating from pre-Tudor days, with its foundations said to be Roman .
A Sally Lunn is a light brioche-like confection, butter and egg-enriched and milk and cream loosened dough carefully baked then glazed on the top when out of the oven. Some would have the bun flavoured with lemon peel or spice, or saffron, but purists would tend to opt for the rich dough to have the stage to itself.
The Sally Lunn is traditionally sold in Bath for consumption at breakfast warm from the oven, split horizontally and buttered or better spread with cream, the thicker the better. It is, though, sometimes served with savoury items.
Other stories attaching to the bun are that it was in fact brought from France, where it was called the solimeme (perhaps derived from soleil meme - the very sun), or was originally the soleil lune, sun and moon.
Whatever its origin, the Sally Lunn is a fine and genteel product, as elegant as the city that claims it. This is the bun Elizabeth Bennet would have eaten during her stay in Bath, as her creator Jane Austen did. Copies abound, but most are far heavier, and their producers tempted to exceed the sweetness of the original and thus lose its subtlety.
Those convinced that civilisation started to slide when buns were banished from our regular diet should make the pilgrimage to Bath where the authentic version of the bun can be tasted.