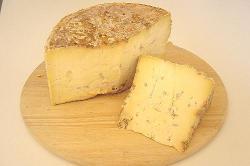 The recent history of Wiltshire Cheese is illustrative of certain changes in British cheese production over the years.
Wiltshire was one of the most sought after cheeses in the country in the 18th century, but when milk sales in London became easy thanks to the coming of the railways, the laborious production of cheese became less attractive, and in financial terms less immediately profitable. Wiltshire cheese thus went into a gradual decline, the conditions in both world wars accelerating this decline still further to the point where little production remained.
The growing interest in craft foods, and 'real' food, however, has seen a revival in the fortunes of Wiltshire cheese. The product is often described as a creamier version of cheddar : it is a pressed cheese, matured for at least three months, during which it is gradually dried and hardened.
Britain now has more than 700 named cheeses, with artisan makers returning to historic styles and adding new ones, a far cry from the days when the actor Arthur Lowe , asking what sort of cheese a hotel had on offer was told by the waitress "Both sorts."
Craft makers in Wiltshire like Jo Hale of Baydon Hill Cheese, (and until their recent retirement Pat and David Doble of Ashmore Farmhouse Cheese), start with locally produced milk from Friesian herds, and make unpasteurised cheese for greater flavour. Wiltshire cheese was traditionally offered in large truckles and in smaller rounds, known in the area as loaves, and the cheese available today comes in the same packages.
Baydon Hill Cheese uses vegetarian rennet, another adaptation to the modern market, where there will be a higher percentage of vegetarian buyers of such products than vegetarians in society as a whole.
It will be interesting to see if with the growing success of 'revivalist' cheeses like Wiltshire the industrial producers enter into the picture again with their own versions. The craft producers, though, have created a niche market of those interested in authentic local flavours rather than cheapness, so it is to be hoped that if and when that competition arrives the artisan producers will not be adversely affected