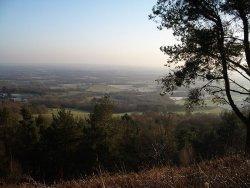 Ralph Vaughan Williams was and is perhaps the most English of composers, whose work even when dissonant so often retains a sweet and almost nostalgic air. Though he studied under Ravel and Bruch, his music is unmistakably English. It is fitting then that Vaughan Williams should be so closely associated with Surrey , that most genteel of counties.
Born in Gloucestershire in 1872, Vaughan Williams was brought to Surrey when only three - his father had died, and his mother, a Wedgewood heiress, decided that he should be brought up at the family home of Leith Hill . The composer donated the property to the National Trust in 1944, so the estate, famous for its rhododendrons and bluebells in late spring, can be visited all year round. The gothic tower atop the hill is the highest point in southern England, on the finest of days 13 counties being visible from it.
Not unsurprisingly, when his sister set up the Leith Hill festival, Ralph in 1905 became its conductor - a post he retained until 1953.
As a child of privilege Vaughan Williams was educated at Charterhouse in Godalming , one of the country's great public schools, and there is a Vaughan Williams Centre at the school now.
When the only suitable large scale music venue in Dorking was converted into a cinema, the composer lobbied and worked for a replacement, and put his hand in his pocket to boot, which in due course brought about the construction of Dorking Halls . The very 1930s buildings still stand, and outside them now is a statue of their most famous conductor and progenitor.
Dorking was a town the artist loved dearly: he was a senior officer of the Dorking and District Preservation Society, and was closely associated with St Martin's church , famous for its huge spire. A commemorative plaque there recalls that link.
For a composer of pastoral idylls the North Downs countryside around Dorking provided great inspiration, as it will still do for visitors: Box Hill in Mole Valley to the north of the town is famed for its orchids and the beauty of the country estate there, and on the other side of the valley is Denbies Wine Estate , obviously something that might interest casual visitors, but with a very specific Vaughan Williams association - The Surrey Performing Arts Library is housed on its land, and it features a permanent exhibition of material associated with the composer.
So why not load Serenade to Music on the i-pod, or any one of his symphonies from four to seven, all composed during his time in Surrey, and while listening to them explore the lovely North Downs, visit a vineyard, and drop in to Dorking, still with the air of a quiet country town, though it is so close to London .