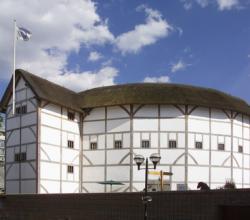 While the Romans certainly constructed amphitheatres in Britain, and in about AD140 built the Theatre of Verulamium (St Albans) complete with stage, no purpose built theatres were put up in the country after their departure until 1576 when the greatest actor-manager of the early Elizabethan era, James Burbage, risked his fortune in creating The Theatre in Shoreditch , London.
The venture prospered, but the wooden building stood on land leased from the tricky Giles Allen, who when the 21-year lease for the ground neared expiry in 1596 claimed the building became his property when the lease was up. James Burbage died in 1597, but his sons Richard and Cuthbert, perhaps in part inspired by their fathers earlier training as a joiner, bypassed the courts and hired a carpenter, Peter Street, who during Allens absence from the capital for the Christmas holidays directed the dismantling of the entire structure. The actors in the Chamberlains Men who had worked there provided much of the labour and helped put the timber into storage in a warehouse in Bridewell.
When winter ended the beams and joists were hauled to a new site in Southwark , the other side of the Thames, and once put together they formed a new place of entertainment, The Globe, just south of Maiden Lane. The new building was quite close to a rival, The Rose, transplanting the heart of the infant theatre district from Shoreditch (where The Theatre had attracted a rival, The Curtain) to Southwark.
We know that a good many of Shakespeares plays were staged at The Globe , his greatest comedies Twelfth Night and A Midsummer Nights Dream among them, and arguably his three greatest tragedies, Hamlet, Macbeth, and King Lear. He had been acting with and writing for The Chamberlains Men since at least 1594, probably earlier. His importance to the troupe was such that Babbages sons included him in the group sold shares in the new building.
For the next 14 years The Globe flourished. But on June 29 1613, during a performance of Shakespeare's Henry VIII , the dramatic firing of a stage cannon led to the buildings destruction by flames, smouldering wadding from the cannon reaching the thatched roof and setting it ablaze beyond saving. Legend has it that only one minor casualty resulted from the fire, a man who had to have his burning clothes extinguished by beer.
Rebuilt immediately and reopened in 1614, The Globe continued to delight (and doubtless annoy too) audiences until it was closed by the Puritans in 1642, being knocked down by developers putting up new housing in 1644.
Though The Globe was of course a major part of our cultural history, it looked unlikely ever to be brought back, though the idea was mooted over the years. It took an energetic American, the anglophile Sam Wanamaker, to drive the project on. His first professional performance in the USA was in a reconstruction of the building, and it was close to his heart. When he first came to London in 1949 he was saddened to find little evidence the theatrical landmark. In 1970 he founded the Shakespeare Globe Trust, and in the face of bureaucratic obstacles and early indifference he pushed and prodded until a site near to the original was purchased, and work began.
Sadly Wanamaker did not live to see his dream completed, dying in London in 1993. It is a sad indictment of our often morally corrupt and class ridden honours system that for his incredible endurance and the incalculable benefit he brought to British theatre, Wanamaker received just an honorary CBE rather than the deserved honorary knighthood. But four years after his death The Globe was opened.
In some ways The Globe of today is a re-imagining of the original rather than a reconstruction, with limited evidence as the basis for its construction. Some views of the old exterior existed which gave great help to the architects  showing three tiers for example; and the traditional techniques and materials used in themselves dictated construction: green oak, water reed roofing (based on archaeological evidence from the original site)  the first allowed in London since the fire of 1666 but now suitably fire-proofed of course  and traditional lime plaster and lime wash were all used in the new building.
The architects were also helped by the partial excavation of the original building, some 200 yards or more distant, in 1989, though as Anchor Terrace built over the site is listed no further discoveries are likely in the near future. What was revealed by the dig was that rather than being round, as suggested by at least one drawing, it had been a 20-sided structure. Scraps of evidence from Shakespeares own plays, and other such sources, helped create the vision of the building that guided its construction, Wanamaker taking a very active part in this planning and providing his expertise as actor and director.
Today The Globe puts on Shakespearean pieces, and a range of other plays and events, its season running from May to October in keeping with what happened in the Bards day, dictated too by the open air nature of the theatre  only the stage and the dearer seats being roofed over, the groundlings having no such luxury, nor seats either.