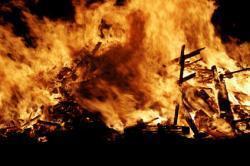 In what is claimed to be a continuation of ancient pagan ceremonies, every June 23 a series of fires are lit across Cornwall, the lie stretching from Lands End to the northern border with Devon , or the English border as some Cornish people look at it.
These days the midsummer bonfires are fed with greenery, one bunch of good, medicinal plants, another a bad bunch of noxious weeds and bitter herbs, both of them bound with ribbons of symbolic colours. But many centuries ago, according to some sources, there were animal and even human sacrifices made the offerings by being plunged into the flames. When Christianity came to Britain the church embraced the custom, while ensuring it was associated with a Christian saint as it took place on St Johns Day eve.
The tradition faded in Victorian times, but was revived when the Old Cornwall movement started in the 1920s. Now fires are lit in Redruth , St Just , St Columb , St Breock, St Agnes , Madron and St Ives , still with the Old Cornwall movement to the fore, and with the ceremony conducted in the Cornish language.