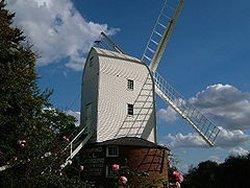 Did you know that the oldest timber-framed barn in the world is at Cressing Temple near Braintree? The huge Barley Barn was built in about 1206AD by the Knights Templar , and stands next to a more recent structure  well, Wheat Barn was erected in 1256. Cressing Temple was the first land in England granted to the Templars, the holding run to raise funds for the organisations work in the Holy Land. These days the complex hosts events, including weddings.