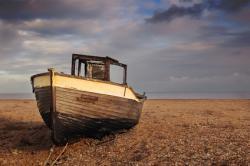 Did you know that John Buchan began writing The 39 Steps while staying in Broadstairs? He was bedridden with a duodenal ulcer and needed to take his mind off the pain. The steps leading from villa to beach which give the book its title and denouement are supposedly based on 78 steps at North Foreland, though why he halved the number is unclear: euphony, his habit of taking them two at a time, or his 39th birthday party taking place at a relatives villa adjacent to the steps have all been suggested.