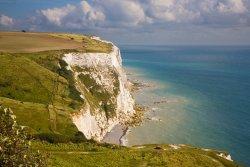 Did you know that St Edmunds in Dover is the smallest church in Britain still in regular use? The chapel was built in 1262 to serve pilgrims arriving in Dover en route to Canterbury to worship at the shrine of St Thomas Becket .

Did you know that Matthew Webb , the very first person to swim the English Channel, left from Dover in 1875 ? It took almost 22 hours. He became a huge celebrity, and like many such could not face his fame waning: in 1883 he tried to boost it with another feat  attempting to defeat the rapids below Niagara Falls. He came second and is buried in the town.