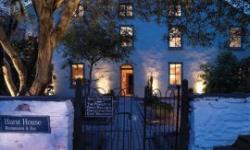 Did you know that Laugharne is the only place in Britain where the office of Portreeve (originally a Saxon post, roughly translated as Market Official) is confirmed by Act of Parliament? The Portreeve is elected every six months (though nowadays serves longer), to preside over the Grand Jury of 21 burgesses at the Court Leet and Court Baron. Aside from the honour the office holder also gets the use of a plot of land, the Portreeves Field, something perhaps of more significance when the system began in about 1290.