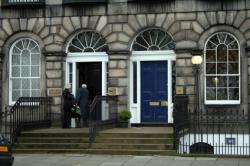 Did you know the Kings Fountain in Linlithgow Palace is the oldest fountain in Britain? The ornate structure dates from 1537, commissioned by James V of Scotland apparently as a way of impressing his new French wife. According to local legend when Bonnie Prince Charlie stopped off at the palace in 1745 wine replaced water  which would perhaps have suited that particularly useless would-be monarch. The Duke of Cumberland avenged the treachery by burning the palace in 1746.