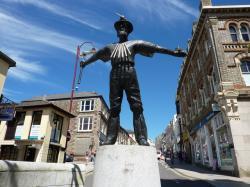 Did you know that the first domestic residence in the world to be lit by gas is in Redruth - installed by William Murdock in 1794? He was also the originator of the term gasometer.

Did you know that in 1842 Cornish Engineer Michael Loam gave a demonstration of the countrys first ever elevator at Gwennap near Redruth? The so-called Cornish Man Engine was installed at Tresavean Mine there to transport miners between the surface and the workings, saving an hours climbing a day.