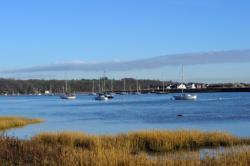 Did you know that in 1532 Henry VIII and Anne Boleyn spent their honeymoon at Shurland Hall, Eastchurch - just outside Sheerness? Plague had hit London, and Henry was en route to Calais and a summit with Francis I, hoping to gain his support in the Kings Great Matter. The three day visit nearly bankrupted owner Sir Thomas Cheyne as the royal couple were accompanied by a retinue of 300, all of them to be fed, entertained and doubtless particularly expensively provided with drink.