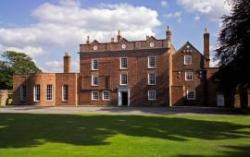 Did you know that Napoleon IIIs stay in Southport between 1846 and 1848 is supposed to have influenced his later rebuilding of Paris assisted by Haussmann? He lived on the elegant and very wide Lord Street in the Lancashire seaside town, a huge contrast with the cramped medieval streets of Paris in the mid-19th century; those narrow streets rather easier for potential opponents of the Emperor to barricade than the boulevards that replaced them.