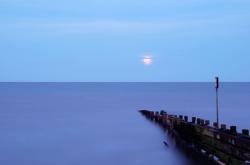 Did you know that Eric Blair took the pseudonym George Orwell after the River Orwell , which he used to visit regularly from his parents house in Southwold? It was in that beautiful seaside town that he attended a crammer to prepare for his Indian Imperial Police exams; his father had retired there in 1921. Orwells later time there included work on Burmese Days, and equally nobly time on the allotments.