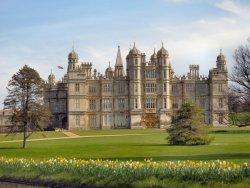 Did you know that the first tomatoes grown in the UK were raised in the conservatory of the great 16th century pile Burghley House near Stamford? Those early fruits would almost certainly not have been eaten as the British considered tomatoes to be poisonous until perhaps the 18th century. They do in fact contain minute and inconsequential amounts of a toxin called... Tomatine.