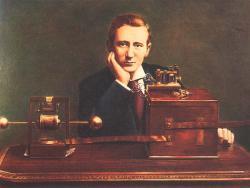 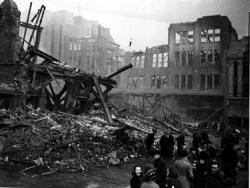 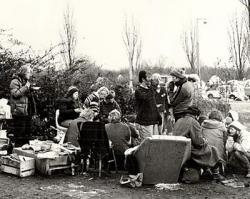 The Italian-Irish engineer Guglielmo Marconi, who was to receive the Nobel Prize for Physics for his contribution to the understanding of radio transmission in 1909, was not in fact a great technical innovator. But he was a clever businessman and manager, with the prescience to understand the commercial implications of wireless telegraphy.

Marconi, born in Bologna in 1874, came to England in 1896 to seek support for his research into radio waves. He seems to have assimilated and borrowed the work of others researching in that field  particularly Tesla and Hertz - with little respect for the niceties. He acknowledged his inadequacies as an engineer and technician, employing some of the most brilliant minds available to work for his company  for example Sir Ambrose Fleming, who actually designed the equipment used in the first transatlantic wireless message.

Marconi developed a system capable at first of sending messages just a few hundred metres, then building up to greater distances. He showed his awareness of the military possibilities of the technology by arranging a demonstration on Salisbury Plain , and of what would now be called the media potential by having two radio sets on boats reporting on an Americas Cup race in 1899.

But Marconis greatest claim-to-fame was his achievement in arranging the first transatlantic radio transmission. As with his other work, this transmission would be in Morse code  his company did not begin work in voice telegraphy until 1912, long after others had entered that field.

Marconi had a transmission centre set up in Poldhu on the Lizard Peninsula in Cornwall to beam a signal across the Atlantic to a reception station on Signal Hill in St Johns, Newfoundland. On December 11 a signal was sent, but the balloon raising the receiving aerial into the sky was torn away by strong winds. The next day a kite was used to lift the 400 foot high aerial, but again the winds intervened and the first kite was blown away. The second, however, was more stable, and the simplest of messages was received, the letter S in Morse code  dot-dot-dot. This came through thirty minutes after midday, and was witnessed by Marconi and his assistant Kemp.

The veracity of this claim to success has been doubted by some, given the lack of independent witnesses and the nature of the message, which it is feasible could have been background noise from atmospheric radiation. Marconi himself felt compelled to arrange a more public and perhaps more scientific test the following year, transmitting from the SS Philadelphia as she sailed west across the Atlantic.

But most do accept that Marconi, the great practical pioneer of radio transmission, did indeed succeed in crossing the great ocean with a radio message on December 12 1901.
When Marconi died in 1937 the world honoured him, radio stations across the globe halting transmission for two minutes in his memory.