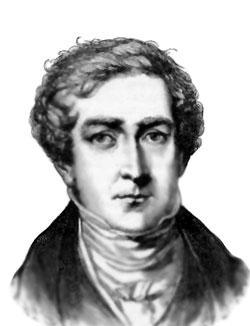 Robert Peel was born 5th February 1788 and died 2nd July 1850. He was twice elected Conservative Prime Minister and is most famous as a social reformer instrumental in forming the Metropolitan police force and repealing the Corn Laws. He was born in Bury, Lancashire, the son of Sir Robert Peel, a wealthy textile manufacturer and Member of Parliament. He attended Hipperholme Grammar School, followed by Harrow School and then Christ Church, Oxford. He entered politics at the age of 21 as MP for the Irish rotten borough of Cashel, Tipperary. His early political career included appointments as under-secretary for war and colonies in 1809, and chief secretary for Ireland in 1812. He married Julia Floyd, youngest daughter of General Sir John Floyd, in 1820, and they had 5 sons and 2 daughters together. In 1822 he entered the Tory cabinet, becoming Home Secretary, and introducing far reaching criminal law and prison reforms which included establishing the Metropolitan Police Act in 1829. The 1,000 constables employed within the Metropolitan Police Force at Scotland Yard were nicknamed 'Bobbies' or 'Peelers' and although unpopular initially, proved to be tremendously effective for London and later, other cities. The next few years were turbulent times for Peel's Tory ministry, seeing him resign over Catholic emancipation issues and his government under the Duke of Wellington losing to the Whigs in 1830 over parliamentary reform. However, by 1834 the Whig government had been dismissed by King William IV, the last time a monarch would do so of his own accord, and Peel was appointed Prime Minister. He was by now somewhat of a more enlightened Conservative, and in his Tamworth Manifesto (the first political manifesto of its kind in British history), he outlined his support for the Reform Act. His government was in a minority in the House of Commons though and Peel, frustrated by this, resigned in 1835. He was Leader of the Opposition between 1835 to 1841 when he tried to persuade Queen Victoria to change her association with the Whig party who were again in power. He finally was able to lead a majority Conservative government when he became Prime Minister again in 1841. It was during this government that he was able to oversee significant legislation such as The Mines Act of 1842 which forbade the employment of women and children underground; and the Factory Act of 1844 which limited working hours for women and children in factories. However, his biggest challenge came in 1845 when he attempted to repeal the Corn Laws, in an effort to resolve the Great Irish Famine, as well as encourage free trade. He faced staunch opposition from landowners and agriculturalists within his own party who would not support him, and he struggled in his efforts to convince them for many months. It was only with support from Whigs and Radicals that the Corn Laws were eventually repealed in June 1846. However, a following bill was defeated as a direct consequence and Peel resigned in frustration, never to hold office again. He had his loyal 'Peelite' supporters and was courted by the Whig/Radical coalition to join them, but he refused. He became Sir Robert Peel, 2nd Baronet of Drayton Hall, when his father died in 1830, the same year he became MP for Tamworth, remaining so up until his death in 1850 when he was thrown from his horse whilst riding up Constitution Hill in London. He was buried in St. Peter's Church at Drayton Bassett, Staffordshire.

Contributors: Do you have a site related to Robert Peel?
Supply some content for this page and we will gladly add a link to your site. Email here.