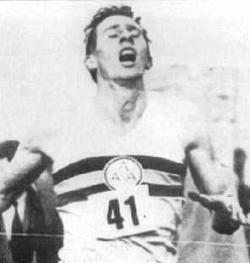 Sir Roger Bannister is one of the most famous names of all time in British athletics. Despite preceding what has become known as the golden era in British middle distance running by some quarter of a century, he name is nonetheless synonymous with British running glory.

Bannister was a 1500m and mile runner who broke one of the most famous barriers in middle distance running. He was famously the first person to break the four minute mile mark. He did not take up running until the age of 17 and even then trained very lightly. Nevertheless he showed a lot of promise and within only two years was offered a possible chance to join the British Olympic squad for the 1948 Olympics. He declined this, instead preferring to concentrate on preparing for the 1952 Olympics in Helsinki.

Over the next two years he showed further improvements, despite a lack of hard training. He achieved some creditable second and third places in big races, including third place in the 800m at the European Championships of 1950. Bannister was not content with this, however, and it spurred him on to intensify his training.

Bannister was dismayed to find that there was to be an additional 'semi final' race in the 1500m at the Helsinki Olympics. He knew that this favoured athletes with more intense training regimes than himself. After qualifying for the final he felt 'blown and unhappy'. Despite this, he featured in an astounding final, in which the eight athletes broke the old Olympic record. Bannister finished fourth and set a new British record, but this was no consolation in his eyes for missing out on the medals.

After considering giving up running, Bannister set his sights on a new goal. He wanted to be the first person to run a mile in less than four minutes. He finally achieved this in May 1954 at a meeting between British AAA and Oxford University by setting a time of 3 minutes 59.4 seconds. In the same year he went on to win gold in the mile at the Commonwealth Games and gold in the 1500m at the European Championships.

Following his retirement, Bannister became a highly successful neurologist. He personally considers his notable achievements in this field to be far more important than the four minute mile barrier. Bannister also initiated the first testing procedures for anabolic steroid use amongst athletes

Contributors: Do you have a site related to Roger Bannister?
Supply some content for this page and we will gladly add a link to your site. Email here.