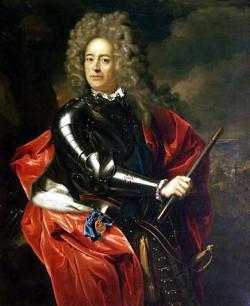 "He never fought a battle that he did not win, and never besieged a place that he did not take." The Duke of Marlboroughs victories in Europe laid the foundations for Britains rise to power in the 18th century and he is generally considered the greatest military genius this country has produced.

Born on May 26 1650 John Churchill Marlborough was the son of Winston Churchill, an impoverished West Country gentleman. He began his career as a lowly page serving the Duke of York through the 1670s and early 1680s. Here his courage and diplomacy earned him military advancement and political power. In 1685 Churchill distinguished himself in defeating the Monmouth Rebellion and in doing so helped the Catholic James II to the English throne. Only three years later he changed sides to support William of Orange, for which he was made Earl of Marlborough at Williams coronation. With the outbreak of the Nine Years War in Europe in 1688, however, Marlborough came under suspicion as a closet Jacobite. James II was plotting to regain his crown and Marlborough was suspected of aiding him, thus was stripped of his office and despatched to Canada as Governor of the Hudson Bay Company.

It was Marlboroughs marriage to Sarah Jennings, friend of the future Queen Anne, together with the outbreak of the War of the Spanish Succession (1701 -1714) which restored his fortunes. Made Duke of Marlborough in 1702 he became the brilliant leader of the English armies on the continent winning famous victories at Blenheim (1704) for which unprecedentedly he was granted a palace at Woodstock, Ramillies (1706), Oudenarde (1708) and Malplaquet (1709). In spite of this events again conspired to force him from office in some disgrace and into a self-imposed exile until the accession of George I in 1714, whereupon he was able to wield substantial influence. After his retirement he concentrated on the building of Blenheim Palace, now the ancestral home of the Churchill family, where died on June 16 1722.

From Roy Richardson on 21st June 2011
This person has no link directly with Exouth in Devononshire, but does have a link with Eyemouth,which is a different part of the U.K.

Contributors: Do you have a site related to John Churchill Marlborough?
Supply some content for this page and we will gladly add a link to your site. Email here.