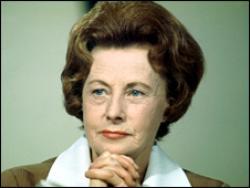 It has been said that without Barbara Castle Margaret Thatcher may never have reached Downing Street. Coming from opposite sides of the political spectrum they both displayed a formidable conviction and proved the equal to their male counterparts.

She was born Barbara Betts in Chesterfield on 6 October 1910, moving with her family to Bradford in 1922. Barbara grew up in the city absorbing socialist politics and winning a place at St Hughs College, Oxford. In WWII she worked for the Ministry of Food and as an ARP warden during the Blitz.

Having married Ted Castle in 1944, Barbara Castle was elected as MP for Blackburn in the1945 general election. In the Labour government she was prominent for her left-wing views and anti-apartheid stance. During the Harold Wilson government (1964 -1970) she held various ministerial posts, most famously as Minister of Transport. Here she introduced breathalyser tests and seatbelt legislation, and confirmed the 70 mph speed limit on motorways, though interestingly she never learned to drive. In 1969 Barbara Castle became Employment Secretary, and tried without success to reduce the power of the unions. This led to a split in the party and alienated her from her former left-wing colleagues including Jim Callahan who was to dismiss her when he became Prime Minister in 1976.

Out of government she became a Euro MP in 1979 despite her euro-scepticism. At home she held the safe Labour seat of Greater Manchester North from 1979 to 1984, and then Greater Manchester West from 1984 -1989. Barbara Castle died at Ibstone in Buckinghamshire on May 3 2002.

Contributors: Do you have a site related to Barbara Castle?
Supply some content for this page and we will gladly add a link to your site. Email here.