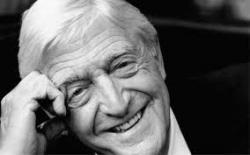 Born in Cudworth, South Yorkshire
Born on 28th of March 1935

Began as a newspaper journalist before becoming a television producer. Hosted a number of television shows including the well known Parkinson. Co-founded Pavilion Books and TV-am. Has written regularly for many newspapers, including a weekly sports. In 1995, was named Sports Feature Writer Of The Year at the British Sports Journalism Awards.

Contributors: Do you have a site related to Michael Parkinson?
Supply some content for this page and we will gladly add a link to your site. Email here.