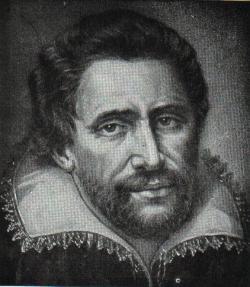 'True happiness consists not in'... More

It is Jonsons curse that as a contemporary of Shakespeare, whose First Folio he probably edited, he is compared unfavourably with him as any playwright would be. But their styles are so different as to make comparison invidious, Jonsons works are replete with classical allusions, and his greatest plays Volpone and The Alchemist are great satire, a field little visited by his rival.
Ben Jonson was born about June 11 1572 in Westminster. He attended to Westminster School, not going on to university so his much flaunted classical knowledge derives from his schooldays. His stepfather was a master bricklayer, and Jonson (whose own father died before his birth) worked briefly for him before seeking adventure as a soldier in the Netherlands, where he claimed to have killed in single combat. His fighting ability was employed again in a duel in 1598 when he killed a fellow-actor.
Jonson spent time in Marshalsea Gaol because of the offence caused by his co-written Isle of Dogs; in Newgate for the duel-manslaughter; and he was behind bars again for another co-written piece, Eastward Ho! in 1605  an unwisely anti-Scottish play, James I having recently become king. Jonsons character destined him for conflict and argument  even his friend Drummond, a Scottish poet, called him a great lover and praiser of himself, a contemner and scorner of others, which accords with his part in The War of the Theatres, when various authors used their plays to attack one another.
For his receipt of a pension from James I, later increased by Charles I, he is regarded as the first poet laureate; he adapted his writing to the times, later in his career being a successful collaborator with Inigo Jones in putting on masques for the court; writing some great and very influential poetry; and trying his hand at classical histories, and Roman tragedies. But he will be remembered mostly for his great satirical writing: Volpone (1606) and The Alchemist (1610); and to a lesser extent for his rather less disciplined comedies Bartholomew Fair (1614) and The Silent Woman (1609).
In his later years his abilities and health declined, though characteristically he put his lack of success down to the intrigue of others. He died in London on August 6 1637.

Contributors: Do you have a site related to Ben Jonson?
Supply some content for this page and we will gladly add a link to your site. Email here.