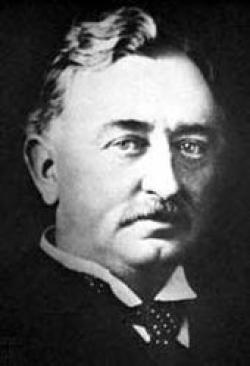 'Remember that you are an Engli'... More

Arch-imperialist, diamond magnate and politician Cecil Rhodes was born July 5, 1853 in Bishop's Stortford, England. Aged 16 he was sent to South Africa to work on a cotton farm with his brother. With the discovery of diamonds at Kimberley Rhodes switched to diamond prospecting, first working an open pit mine. He graduated to investing in diamond claims and improving mining techniques. Rhodes became wealthy and successful enough to return to England and study at Oxford while retaining his South African holdings  his money ensuring he was invited to join the then notorious and still very exclusive Bullingdon Club. Cecil Rhodes imperial vision was formed during this time and during his life he was to be relentless in his pursuit of a British Empire in Africa stretching from the Cape to Cairo and ultimately beyond: indeed he is quoted as saying I would annex the planets if I could.

In 1880 Rhodes formed the De Beers Mining Company, a virtual diamond monopoly which was to consolidate his considerable fortune. His success continued and in1889 he founded the British South Africa Company, and with it gained the permission of the British government to occupy Mashonaland which together with Matabeleland was to become Rhodesia in 1894. During this time Rhodes became Prime Minister of the Cape (1890) but had to resign after an abortive attack on the Dutch-occupied Transvaal aimed at furthering British imperial and mining interests.

When the Boer war broke out in 1899 Rhodes was involved in the defence of Kimberley. His exertions weakened him and led to a convalescence in Europe from where he returned in 1902, only to die on March 26 at Muizenberg, South Africa. He left £6 million of his fortune to be used for Rhodes Scholarships to Oxford, a legacy which continues to this day.

Contributors: Do you have a site related to Cecil Rhodes?
Supply some content for this page and we will gladly add a link to your site. Email here.