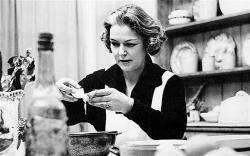 Elizabeth David reinvented the English diet while turning cookery writing into an art. Before Elizabeth David olive oil and garlic were exotic ingredients in Britain and practically the only way you could taste French or Italian food was to go abroad.

Born December 6, 1913 at Wotton Manor in Sussex, Elizabeth David nee Gwynne was the privileged daughter of a Tory MP. She studied at the Sorbonne while living with a French family and it was this experience which first opened her eyes and her taste buds to French cuisine. However before she found her true vocation David embarked on an acting career and then a tumultuous affair with the roguish Charles Gibson-Cowan. Leaving England for France in 1939 the following years saw the couple fleeing or being deported from most of the war zones around the Mediterranean, an adventurous time but one which was to end in their separation in Cairo. Here Elizabeth David married Lt. Col. Anthony David, after another affair with an American soldier, more to ensure her respectability and provide for her than anything else. They divorced in 1960  his fortune having proved smaller than she had expected.

Back in England by1946 David was confronted with the full awfulness of postwar English cooking with rationing and poor ingredients contributing to a moribund national cuisine. Yearning for the sun and savour of Mediterranean food David started to write the articles that were to bring courgettes and Le Creuset to the English kitchen. Her first book Mediterranean Cooking confirmed her status as the countrys most influential cookery writer. Her subsequent books introduced Italian and French Provincial cooking to a hungry and appreciative audience during the 50s and 60s.

A heavy drinker, David suffered a stroke in 1963 but was to continue working, opening her shop in Pimlico in 1965 and writing the first, later much aped, food/travel articles for Vogue. Her writing style is clear and precise, backed with enormous breadth of experience and learning. Davids numerous awards included Fellow of the Royal Society of Literature (1982) and a CBE (1986). Elizabeth David died on May 22 1992 at the flat in Chelsea were she had lived for 40 years.

Contributors: Do you have a site related to Elizabeth David?
Supply some content for this page and we will gladly add a link to your site. Email here.