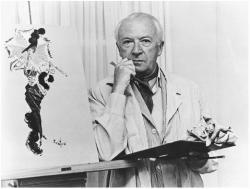 
The portrait photographer and costume designer Cecil Beaton, born in Hampstead in 1904, came from a wealthy background, his private schooling including at Harrow giving him early contacts with the likes of Evelyn Waugh (said to have bullied him) Henry Longhurst and Cyril Connolly. He studied at St Johns Cambridge, though he never graduated, again making contacts vital for his future career.
In 1930 he did a deal with the owner of then derelict Ashcombe House near Salisbury (a property now owned by Guy Ritchie), paying a peppercorn rent on condition he improve the place. During his tenancy, which finished in 1945, he entertained great names including Augustus John, Greta Garbo (a lover of Beatons), Gary Cooper (a close friend and another claimed conquest), and Rex Whistler.
As a society photographer with private clients and working for magazines like Vogue he mixed with the rich and famous, becoming the royal familys preferred photo portraitist  the Queen Mother his favourite subject.
A second strand of his career, begun while at university, was costume design for the stage, and later for the cinema. He won Oscars for his costumes for Gigi and My Fair Lady.
In 1972, the year in which he was knighted, he suffered a major stroke which ruined his health for the rest of his life, paralysing his right side, though he continued working. Beaton died in 1980.

Contributors: Do you have a site related to Cecil Beaton?
Supply some content for this page and we will gladly add a link to your site. Email here.