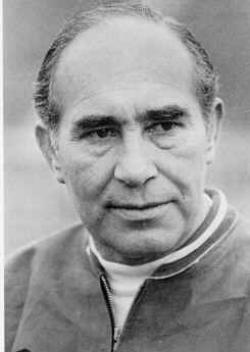 Sir Alf Ramsey is a name that stays close to the heart of any English football fan. Born to a working-class family in Essex, Ramsey played for his school and army regiment before joining Portsmouth as a youth. He played for Portsmouth during the war before joining bitter south coast rivals Southampton as a professional.

After six years he moved to Tottenham Hotspur where he enjoyed his best playing success. He made 226 first team appearances and helped Tottenham in 1951 to become the first team to win the league title only a year after being promoted to the top flight. Ramsey was capped for England 32 times.

It is for his management, however, that Ramsey is best known. After retiring as a player in 1955 he assumed the role of manager at Ipswich Town. He steered the team from the Third Division to the top of the First Division, now the Premiership. This success led to his appointment as manager of England. Like no other before or since, Alf Ramsey delivered at international level just as he had as a club manager.

Three years after his appointment in 1963, Ramsey took England to the World Cup finals of 1966 which was held on home soil. Ramsey guided the team through some difficult encounters to reach the final against Germany at Wembley Stadium. In one of the most famous football matches of all time the teams remained locked at 2-2 following the end of normal time. Ramsey told his team 'you've won it once, now you'll have to go and win it again' in a reference to the last minute German equaliser. He also suggested that the Germans were exhausted before sending the team out for extra time. England, featuring legendary names such as Bobby Moore, Bobby Charlton, Alan Ball and Geoff Hurst responded and won the game 4-2. It was, and remains, the only time England has ever won the World Cup Final.

His much touted 1970 team couldn't reproduce this were beaten in the quarter final by West Germany, losing 3-2 after leading by two goals at half time. The team then failed to even qualify for the 1974 World Cup and Ramsey was criticised for not changing with the times. He was fired as England manager and replaced by Don Revie, who unfortunately fared even worse than Sir Alf Ramsey had done in his later years.

Contributors: Do you have a site related to Alf Ramsey?
Supply some content for this page and we will gladly add a link to your site. Email here.