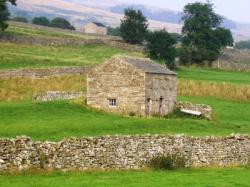 The Howardian Hills are an area of rolling hills, farmland, woodland and parkland found between the Vales of Pickering , the North Yorkshire National Park , the Yorkshire Wolds and York . The hills are named after the Howard family who once owned a large part of the area. The Howardian Hills are designated as an Area of Outstanding natural Beauty (ANOB), the designation was made in 1987 in recognition of the great importance of the local landscape.

The area is enjoyed by an array of wildlife including some rare species such as knapweed broomrape. Dry stone walling is used extensively and these are also now recognised as having cultural importance, as well as providing further valuable habitats for the areas wildlife population. The River Derwent skirts the eastern edge as it cuts through the hills in the Kirkham Gorge.

The area boasts a number of large country houses and stately homes. These include the very impressive Castle Howard as well as Hovingham Hall , Newburgh Priory , Nunnington Hall and Gilling Castle . The 79 square miles of the ANOB also feature a number of picturesque villages spread among the landscape. The area has a long history of habitation, with a number of antiquities present there, such as Iron Age defensive dykes, medieval castles and monasteries.