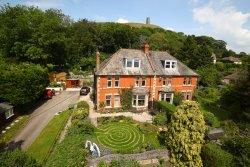 Reviews of Tordown B & B and Healing Centre, Glastonbury

Add your review
Here at Tordown we have run a quiet, peaceful and spiritually aware establishment for 20 years and our reviews have always been positive and complimentary, certainly never have we been accused of such childish responses to a guest when we have spent the better part of our lives in embracing people for who they are. With this in mind we are propelled to respond to this review from Brittany. The original booking was made by the parents for whom Britty9 was a nanny, booking two rooms, one for the parents and one for the nanny and her friend, one of which was entirely unsuitable to house a baby because of a space issue. We were not informed about the babys presence on this particular trip, the parents were put in a room that was suitable. However, the majority of the time, the baby was residing with the young nanny (and her friend) in the other room, where there is insufficient room for a baby, the parents having checked out of their room. When staying at a bed and breakfast for more than one day (which this booking was) it is customary to service each room and provide the guests with fresh towels if needed and make the beds etc. At breakfast the Brittany enquired after activities that the she could engage in with the child while the parents were at the wedding so we did not expect them to be in the room so on a couple of occasions we knocked to see if they had left the room to enable servicing it. In the late afternoon the parents returned to pick up everyone to go out, after which we took the opportunity to service the room. On entering the room we found that a carton of formula milk had been spilt across the dressing table, down the wall (the stain could only be fully removed by repainting it), and into the brand new carpet. There had been no attempt either to mop it up or indeed inform us as we were around the entire time. The room itself was untidy with the guests belongings all over the floor, the bed, etc. so we picked everything up and placed it on the bed. We had to carry out the dressing table to dry as the milk had seeped underneath into the wood and a towel was placed on top of the carpet after we had attempted to clean it. Later that day when Brittany came to ask us for the internet code we mentioned that someone had knocked over the milk giving her the opportunity to explain how or why it had been left spilt for hours. The only response we had from her was complete denial of knowing anything about it and certainly werent fortunate enough to receive an apology but in her review Brittany has acknowledged the spillage... interesting. We mentioned to Brittany that there was nowhere to put the tea tray while the dressing table was drying out so she was welcome to use the kitchen to make formula etc. What a shame that Brittany did not come to us at any point to discuss any of the above issues. If she had come to us as soon as the accident happened, it could have been cleaned up and there would have been no cause for tension. We had no idea who had spilt the formula but it sounds like Brittany has decided to admit her part which is appreciated. We pride ourselves on our open, welcoming and compassionate attitudes to everyone that we meet so we thank all guests/reviewers who cannot help but see this in us.

Review by Brittany on 8th September, 2010

Add your review
I would not recommend this bed and breakfast to anybody. It felt like staying the weekend at your parent's house. Trying to take naps, being interrupted, feeling like asking for things is a bother to the owners. There was also an incident where something was spilled in our room on accident, we left to head into town and while we were gone, Cheryl and Mike went into our bedroom, threw our belongings on the bed, floor, etc. to take out the dresser which had liquid spilled on it. I later got yelled at by them both, despite my constant apologizing. My friend I were then no longer allowed to have any liquids in our bedroom. We are not children, and don't like being treated as such. The place was very clean, which was the one of the only nice things about it. However, after being yelled at, I felt very uncomfortable and didn't leave my room for the next five hours until it was time to leave as I did not want to see these people or speak to them ever again. They say they believe in peace, healing crystals, relaxation and making their guests feel at home, well, all I can say is that is quite hypocritical. Save yourself the possibility of having an experience like mine and book a room at one of the hundred other bed and breakfasts in Glastonbury. They all practice/believe the same types of things in Glastonbury so it would be very beneficial to you and you would get the relaxtion and peace that you're looking for.