"A foodie taking a break in a cottage in the North...more 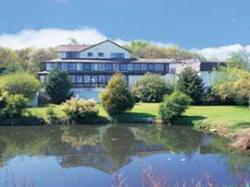 Damson Dene Hotel is situated in one of the prettiest and most tranquil settings in the Lake District. It is ideally situated for visiting Windermere & can be used as a base for walking or touring the Lake District. Damson Dene Hotel has been awarded three stars on the English Tourism Council Quality Assurance Scheme and offers the most value for money accommodation in the Lake District.The Damson Dene started life as a farm built by Mr 'Pont' Pearson at the turn of the 20th century. He had lost his previous home in a drunken bet and built New House to replace it. Its use as a public building started when Miss Jennie Holme opened the buildings as a hostel for the CTC (Cyclists' Touring Club). She called it the Damson Dene. At first, it was just for men, but when women started turning up they had to have a dormitory, too. The bicycles were housed in a wooden hut and the shippon became a girls' dormitory.