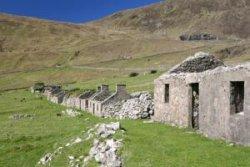 Jura
Did you know that George Orwell wrote 1984 while living on Jura in the Inner Hebrides, and that the Corryvreckan whirlpool nearby nearly claimed him? He wanted tranquillity in which to write that untranquil novel. Messing about in a boat near the whirlpool his boats engine was wrenched off by the swirling current, and rowing he just made it to a rock before the boat was sucked into the deep.