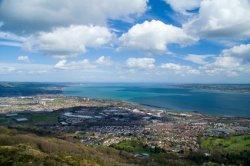 Belfast
Did you know that Anthony Trollope wrote The Warden, the first of his Barsetshire novels, while living in Whiteabbey on the northern edge of Belfast? He spent 18 months in Ireland running postal services in the northern counties, arriving in 1853. Trollope, by the way, is credited with creating the post-box (first introduced in the Channel Islands) for the Post Office.