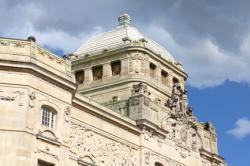 The Theatre Royal in Drury Lane can claim, with a bit of leeway allowed, to be the oldest theatre in London. The leeway is needed as there have been five different versions of the theatre, which was pulled down or burned down with fateful regularity over the centuries.
Before the site was used for theatrical productions another form of entertainment - of sorts - took place there, in the cockpit used for staging cock fights that was incorporated in into the first somewhat ad hoc theatre set up alongside Drury Lane during the reign of James I .
The first purpose build theatre on the site was constructed in 1663, just three years into the Restoration period, when London was rediscovering a taste for entertainments and amusements of all sorts after the Puritan Commonwealth when such frivolities as plays were banned. The architect of the 1663 theatre is not known, but the manager of the King's Company or the King's Servants who played there, Thomas Killigrew, is credited with running the project and having a say in the design.
Killigrew had written for the theatre before the Civil War, and went into exile with Charles II . The latter rewarded Killigrew with Letters Patent to run one of only two venues for 'legitimate theatre' (i.e. spoken plays) in London, the other being given to what has evolved today into the Royal Opera House .
Sadly, though it survived the Great Fire of London in 1666, being well away from the path of that inferno, Killigrew's first building only lasted until a major fire there on January 25 1672, which razed it to the ground.
Sir Christopher Wren is rightly celebrated for his church buildings, including St Paul's , but he also designed the replacement for the Theatre Royal, which opened on March 26 1674, with King Charles II himself in attendance. Samuel Pepys could only get in to the second night.
The theatre's royal connections have been varied and rather suitably dramatic over the years: Nell Gwynne, Charles II's mistress (actually one of many, the man was tireless) was an actress of some renown there, one of the earliest in English theatre, Killigrew having obtained permission for women to appear in stage roles because of his loyal service and royal contacts. And on May 15 1800 George III survived an assassination attempt there, when a madman fired two shots at him, one missing by little more than a foot. This too was the theatre where God Save the Queen was first aired on September 28 1745 , and later Rule Britannia. The royal connection is emphasized by the place having two royal boxes.
Wren may have known churches, but his design for the Theatre Royal left something to be desired, namely space, though it sufficed for more than 100 years before being demolished in 1791 to make way for a grander affair that was, however, to prove the shortest lived incarnation.
The replacement for Wren's version was designed by the great Henry Holland , whose portfolio also includes Brooks Club, Sloane Square, the original Marine Pavilion in Brighton, and the revamping of Carlton House.
Holland's theatre, though various innovations had been installed to avoid such a disaster, burned down on February 24 1809, but three years later another had risen from the ashes, this time designed by Benjamin Dean Wyatt, a member of the great Wyatt architectural dynasty. It is Wyatt's 1812 building which forms the core of the modern Theatre Royal, though significant changes have been made since Hamlet was staged on its first night: in 1831 a colonnade running along the side of the building was added; in 1820 the portico that still provides the front entrance on Catherine Street was erected.
Quite why the theatre should be given its Drury Lane suffix is far from clear: the front entrance is as noted on Catherine Street, which previously was known as Bridges Street. Indeed the theatre at one time was referred to as the Theatre Royal Bridges Street: Drury Lane is only backed onto by the building.
Over its several incarnations the theatre has seen some of the greatest names in British theatre history treading the boards or managing those who did so, or writing specifically for the place: David Garrick , Richard Brinsley Sheridan , Edmund Kean, John Dryden , Sarah Siddons , and in later years Ivor Novello and Noel Coward , to name but a few.
The romance surrounding the theatre is not restricted to the stage: not one but two enduring folk customs are closely associated with it: the Baddeley Cake, and Doggett's Coat and Badge Race (see the London part of our Folk Customs section for details). And of course there have to be ghosts: legendary clown Joe Grimaldi, in ghostly form, is supposed to comfort nervous performers; not so The Grey Man, stabbed to death and hidden in a wall nearby; and the spirit of actor Charles Macklin must be anything but comforting - he killed fellow thespian Thomas Hallam by shoving his cane through the man's eye during a dispute over a wig in 1735 - but he was acquitted of murder having conducted his own defence brilliantly - though he was careful to avoid encores.
In the twentieth century the theatre became known for its spectacular staging of musicals - Novello's works, then after WWII Rodgers and Hammerstein's featuring frequently. In recent times Andrew Lloyd Webber 's Really Useful Group has run the theatre, continuing the tradition of popular and dramatically staged musicals - it was here that Miss Saigon set the record for the longest running London musical, opening in 1989 and closing in 1999.