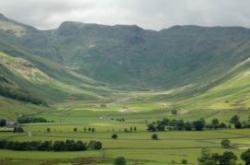 Get Fit on the North York Moors

January is the traditional month for regretting the excesses of December and promising yourself  and others  that this year you are definitely going to do something about your fitness. If you are not back to work for the first week of the month, or have some days of annual leave to use before the end of the financial year, why not head for the North York Moors to stretch yourself (and those hamstrings) there?

The added advantage of making for the Moors at this time of year is that you have no illusions about the weather  if it doesnt rain in January something is sadly wrong. But go equipped with proper walking boots, waterproofs and maps and the weather is just another aspect of the challenge. And when you have done your days activities you can down some Black Sheep bitter or Old Peculier with a clear conscience, and replace those calories with some of the excellent fare on offer.

If you really want to push yourself (and lets be honest, are very fit already) there are two Fell Races in the Moors in the early part of January: on Tuesday 1st there are the Captain Cook Races starting in Great Ayton at 11am; and on Sunday the Clay Bank East event near Great Broughton, the former 5 miles, the latter 5.7.

But for most of us a good long hike through the lovely yet rugged countryside is more likely to appeal. Again we stress the need for preparations  no shorts and flip-flops please. There are some guided walks run by the National Park authorities if enough takers book, though the freedom to wander as you will (and the terrain allows) and equally important to stop when you want is tempting too. Do your own detailed research to find a walk that suits you and your party, with plenty of variety on offer from simple routes of just a mile like the Rosedale Mineral Railway, to the far more strenuous Esk Valley Walk, all 35 miles of it, stretching from near Castleton to the coast at Whitby (never will you have earned your fish and chips more).

If you take a dog to accompany your ramble do use your common sense  please dont be one of those owners who believe their pet need not be put on a lead near sheep. They all do. And some of the rockier parts of the landscape mean that sticking to the path is as valid for pets as for people.

There is no reason to limit your efforts to foot-slogging here either: take your bike, or hire one, and enjoy some of the best cycling in Britain: there are some fabulous tracks on the Moor to Sea Cycle Route, a great way to take in towns like Pickering , Scarborough (both more than meriting a stay), Ravenscar and Hawsker. The Langdale Forest is a favourite for cyclists, and in January the midges are not really going to be much of a bother are they? For the extremely adventurous there is even The White Rose Cycle Route from Hull to Middlesbrough, 123 miles of bottom-numbing but heart-pumping activity, part of which takes in the western scarp of the National Park and some of the lesser-known spots like Thimbleby to the east of Northallerton .

Bikes are not of course the only saddled method of transport that will get you puffing and blowing. There are roughly 500 miles of bridleways in the National Park, Forestry Commission land again a draw for riders. Broxa Forest a little inland from Robin Hoods Bay is a popular venue, the mixed woodland (though with pine predominant) and open heath providing contrast and at times shelter if you feel the need to get out of the elements. Theres no shortage of riding centres either, for beginners to get started or the more experienced to improve, including at Saltburn, Thirsk , Helmsley , Irton, Scarborough and Whitby.

Though it may seem illogical, you can get out of any rain that bothers you and maintain your push for fitness by visiting one of the many indoor pools in the area, Ampleforth , Guisborough and Norton-on-Derwent among the settlements with such facilities.

And if you have a head for heights the Moors are known for rock-climbing . There are several centres to provide guidance, and in the winter unless you are very experienced it is probably best to rely on those who know their areas better than you do. Equally vertigo inducing but in a less macho fashion is the Go Ape! facility in the Dalby Forest near Lockton and Levisham.

The North York Moors are used to hosting visitors, and have a fantastic range of accommodation options from which to choose  this site lists cottages and country house hotels, B&Bs and simple old inns , and plenty between. The coastal resorts have some fine hotels that youll maybe want to check out, and the villages that dot the landscape have pubs aplenty in which to relax (and put off that walk until another day if the fire and ale prove too welcoming).

Review from Pete Elloson, 28th Jan 2013:
Get fit in the North York Moors but a photo of Langdale in the Lake District (Rossit Pike left centre)