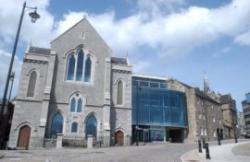 Did you know that whilst renowned as the Granite city Aberdeen is also know as the city of bon accord (goodwill, friendship)

Did you know that Aberdeen has won the Britain in Bloom contest a record 10 times?

Did you know that Aberdeen Football Club 's Pittodrie Stadium was the first all seater stadium in Britain ?

Did you know that St Machars is the only Medieval all Granite Cathedral in the World?

Did you know that the poet Byron began his schooling in Aberdeen, at the grammar school? He was just six when he started attending that establishment. Economic necessity had forced his mother  a Scot née Gordon - to the town, his dissolute father having spent the family i.e. his wifes fortune on drink. He left aged 10 on inheriting a title and property. One of the schools houses is named for Byron, and a statue of him stands in the grounds.

Did you know that the biggest man-made hole in Europe is the remains of Rubislaw quarry in Aberdeen? The now water-filled hole is 466 feet (142m) deep. The estimated six million tonnes of stone dug from the quarry built not only the Granite City itself, but the terraces in front of Parliament and Waterloo Bridge among other structures. It was worked from 1740 to 1971.