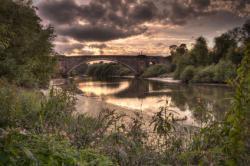 Did you know that under a Tudor law it is supposedly illegal for Welshmen to enter Chester after nightfall  and apparently legal to shoot them with a bow and arrow within the city walls there after midnight? Please dont test the law!

Did you know that Chester Racecourse is Britains oldest sporting venue (in continual use) with the first race occurring in 1539? Racing at the Roodee replaced a particularly violent traditional local football fixture, the substitution thought up by Mayor Henry Gee  hence apparently gee-gees.

Did you know that the first person to walk across Chesters Grosvenor Bridge was a young Princess Victoria ? It was opened by her mother on October 17 1832, but not opened to the public until the following November.

Did you know that Chesters Rows are unique not only in Britain but (in this precise form) anywhere in the world? The covered walkways on four of the main streets of the city allow create double-decker shopping there, and have done so according to records since at least the 13th century.

Did you know that the Roman amphitheatre in Chester had seats for 7000 spectators? Deva (Chester) was one of the most important Roman settlements in Britain.