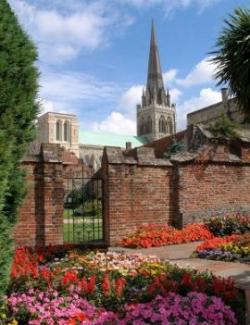 Did you know that the oldest hominid remains yet found in Britain were unearthed at Boxgrove near Chichester? The leg bone of a pre-Neanderthal man was found at a quarry there in 1993; and has since been dated as half a million years old. A six-footer, he is thought to have hunted in a group on what was then the shoreline  but is now about eight miles inland. English Heritage has bought the site which is still being explored by archaeologists.

Did you know that Chichester Cathedral is unique in Britain in three very visible ways? It is the only such medieval building with a) an attached almshouse-hospital (St Marys) still in operation; b) a free-standing bell-tower; and c) a Marc Chagall stained-glass window (though in that respect it is outdone by little All Saints Church in Tudeley).