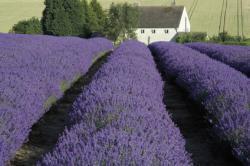 Did you know that the lawnmower was invented and first demonstrated in Stroud in 1830 by local man Edwin Beard Budding? His mower was based on a textile finishing machine used to give woolen cloth an even surface. Budding by the way also invented the adjustable spanner.

Did you know that Cider with Rosie, Laurie Lee 's tale of country life, is set in and around Stroud and the South Cotswolds ? Laurie Lee was born in Stroud, and grew up in nearby Slad , returning there in his later years, one of his haunts the Woolpack Inn .