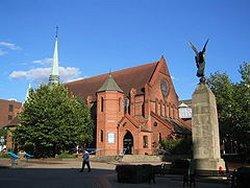 Did you know that the Shah Jahan Mosque in Woking was the first purpose-built mosque in Britain, and that it dates from 1889? It was the brainchild of polyglot polymath orientalist Gottlieb Leitner. The mosque is named for its original benefactor, Shah Jahan, Nawab of Bhopal.

Did you know that when the Martians first land in H.G. Wells  book 'War of the Worlds' they do so on Horsell Common, where Wells lived at the time? The town centre commemorates the link with a statue of a Martian tripod.

Did you know that Brookwood Cemetery in Woking is the largest in Britain? It is also a Grade I Historic Park. It was opened in 1852, 2000 acres of land having been secured for the purpose: among its famous graves are those of Dame Rebecca West, lover of H.G. Wells; and the above-mentioned Gottlieb Leitner.