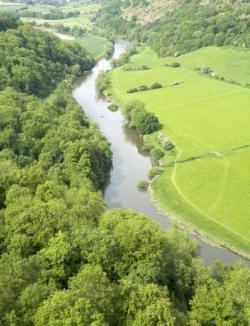 The Wye Valley is an Area of Outstanding Natural Beauty (AONB) that surrounds part of the border between England and Wales in the counties of Gloucestershire, Herefordshire and Monmouthshire. The valley is formed by the River Wye, the fifth largest river in Britain. The area is widely recognised for the beauty of its often dramatic landscapes. The Wye Valley is famous for the limestone gorges and dense native woodlands and is home to some important wildlife, as well as archaeological and industrial remains. It is also historically significant as it is one of the birthplaces of the modern tourism industry.