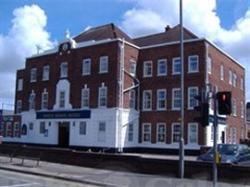 Add your review
WARNING do not stay at this dirty out dated hotel we went to spend just one night and could not even manage that we left the same night after driving 3 hours there we drove another 3 hours back just so we did not have to sleep there. The room smelt damp, the shared bath/shower we would not even think about going in it was really old fashioned and dirty, don't be fooled by the look of the outside of the building you will be disapointed.

Add your review
Absolutly disgusting. Dirty, delapidated room and public areas. The less said about the 'restaurant', the better. I guess it is ok as a contractors flop house.

Add your review
Having enjoyed a weekend in Barrow the only thing that spoilt it was the Whitehouse Hotel. Upon arriving our first impressions was that it was quite old fashioned but thought it was probably very nice in its day...however when we entered our rooms we were disgusted with what we saw. We were a party of 9 with 5 rooms and there were bare wires, stains on floors in all rooms(one of which we had to change as it just wasnt clean), in one of the rooms the light above the bed was actually hanging off!! Have these rooms actually been re-decorated in the last 50yrs? The doors were hanging off the walls, damp was showing, carpets were threadbare, shower curtains stuck to the walls instead of actually trying to fix the shower, and the 'residents lounge' was a joke! There was an old tatty ironing board in the doorway with a sign saying you have to pay a deposit for the iron as the other one got nicked...good job we had a sense of humour many others would of walked out, it was very very poor in fact if trading standards saw this hotel they would shut it down. The website needs updating too because the reality of these rooms are NOT as described. And as for the water feature in the back...words fail me. And finally teach the cleaning maid how to make beds please throwing the duvet over when the sheets underneath were all crinkled up is just lazy. I understand a lot of workmen use this hotel but there is no excuse for things such as bare wires showing and the light above the bed hanging off its purely dangerous and unacceptable. We will not be coming back to this hotel again.