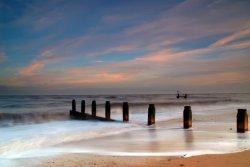 Bungay
Did you know that Bungay in Suffolk is the only place in the UK with an active Town Reeve? (There are Portreeves, however, at Ashburton in Devon and Laugharen in South Wales). The role of Bungays Reeve was until the late 19th century to run the towns administration. These days the title-holder still has control of the market and various lands willed to the settlement. Originally a Saxon introduction, the title is familiar perhaps from Chaucer. Each Reeve is appointed for a year by his predecessor.
Bury St Edmunds
Did you know that the smallest pub in Britain is the aptly named Nutshell in Bury St Edmunds? It opened as a pub in 1867, having previously been a fruit shop. The bar measures just 15 feet by 7 feet, a space into which 15 customers would normally constitute a squeeze, but where the record number of people fitted in stands at 102  though like all good pubs youd imagine theres always room for one more.
Framlingham
Did you know that Framlingham Castle was built by the Bigod family in the 12th century? Roger Bigod who accompanied William the Conqueror in his invasion party became the first Duke of Norfolk . The family was reputedly an especially steadfast and quarrelsome clan and it may be from them we get todays word bigot. It is suggested that the Bigod surname is itself derived from the habit of the Norman French of punctuating their utterances with by god, though given they spoke French that seems very unlikely.
Ipswich
Did you know that the worlds first commercially marketed powered lawnmower was built by Ransomes in Ipswich in 1902? A bit of a difference in scale between that and some of their other lines  combine harvesters, traction engines, and ploughs. The 1902 model, powered by a petrol engine, was not their first venture into lawn maintenance  in 1867 they produced a hand-powered mower.
Lavenham
Did you know that Twinkle Twinkle Little Star was written in Lavenham, inspired by the stars above the town? The words were penned by the then 23 year old poet Jane Taylor, taken from her poem for children The Star. The piece was written in 1806 at her residence in Shilling Street, and was part of a collection Rhymes for the Nursery which she co-authored with her sister Ann.
Leiston
Did you know that what was probably the first purpose-built assembly-line factory in the world was constructed at Leiston in Suffolk in 1853? Richard Garrett and Sons started out in Leiston in 1778 making agricultural hand-tools; but by the middle of the 19th century its steam engines were exported around the world: a boost in orders from the Great Exhibition forced the owners to reorganise their production in a new 85 foot long shed with linear flow for assembly. Today it is a museum.
Lowestoft
Did you know that Lowestoft Ness is Britains most easterly point? The Ordnance Survey grid reference, for those who wish to know, is TM556937. Ness Point, somewhat unromantically off Gas Works Road, holds what might be called a practical artwork  Euroscope  indicating direction and distance to various places of interest.
Newmarket
Did you know that the Rowley Mile on the Newmarket racecourse is the longest turf straight in the horseracing world? It stretches for 1 mile 2 furlongs (i.e. 1.25 miles). The Rowley Mile is a course in itself, one of two in the Newmarket complex. The Bushes near the end of the course mark the start of its famous dip, and were where Charles II liked to spectate from  he by the way the last monarch to ride a Newmarket winner!
Southwold
Did you know that Eric Blair took the pseudonym George Orwell after the River Orwell , which he used to visit regularly from his parents house in Southwold? It was in that beautiful seaside town that he attended a crammer to prepare for his Indian Imperial Police exams; his father had retired there in 1921. Orwells later time there included work on Burmese Days, and equally nobly time on the allotments.
Woodbridge
Did you know that the White Mill on the River Deben in Woodbridge, the current version of which dates from 1793, is one of only two remaining tide mills in Britain? The other is at Eling in Hampshire . It is known that a tide mill existed in Woodbridge by 1170. It last functioned in 1957.