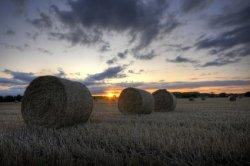 Bourne
Did you know that Robert of Bourne, a Gilbertine monk who spent most of his life at Sempringham near Bourne, dedicated his greatest work, Handlyng Synne (Handling Sin) to the men of Bourne  a back-handed compliment?
Did you know that at Manthorpe, just south of Bourne, stands the largest living Oak Tree in England, the Bowthorpe Oak? It has a circumference of 40 feet and is over 1000 years old. Though still living it is hollow, its interior previously used as an annex to the farmhouse behind which it stands. The living room, as it were, is said to have once accommodated 39 people.
Grantham
Did you know that it was at Woolsthorpe (near Grantham) that Isaac Newton watched an apple fall to the ground and began to formulate the laws of gravity? Most of his most important experiments were conducted at his home - Woolsthorpe Manor . The great scientist was born in the house, and returned to it when Cambridge University was closed by the Great Plague.
Did you know that Grantham has given us the first female Police Officer  Mrs Edith Smith, appointed in November 1914 - the first British woman Prime Minister  Margaret Thatcher - and what is regarded as the worlds first diesel engine  a heavy oil engine made by Richard Hornsby & Sons in the town and designed by Herbert Akroyd Stuart.
Grimsby
Did you know that Britains first North Sea energy find was made off Grimsby on September 17 1965? The drilling rig Sea Gem, converted from a barge, discovered natural gas a mile-and-a-half beneath the sea bed 40 miles east of the Lincolnshire port. Tragically the same platform was involved in the first North Sea rig disaster, when two of its legs collapsed and 13 men were killed on December 27 that same year.
Stamford
Did you know that the first tomatoes grown in the UK were raised in the conservatory of the great 16th century pile Burghley House near Stamford? Those early fruits would almost certainly not have been eaten as the British considered tomatoes to be poisonous until perhaps the 18th century. They do in fact contain minute and inconsequential amounts of a toxin called... Tomatine.
Woodhall Spa
Did you know that the Petwood Hotel at Woodhall Spa was the Officers Mess for 617 squadron - The Dambusters ? The hotel was requisitioned by the RAF in 1942, originally used by two other squadrons; but the building and nearby Woodhall Airfield were considered ideally remote for the secret work that 617 squadron was training for. A bar in the hotel commemorates Guy Gibson and his comrades.