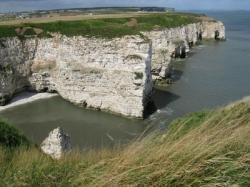 Beverley
Did you know that Beverley is named after Beavers (the name means Beaver Clearing), once common in the area? The town crest still has a beaver on it. The animals were sadly hunted to extinction in Britain many centuries ago: partly for their fur; but more strangely because the church regarded the water-dwelling animals as fish not meat for fasting purposes, so eating beaver was allowed on holy days with the Popes blessing.
Hull
Did you know that the largest parish church in England is Holy Trinity in Hull? At least the largest by area  the lovely St Nicholass in Great Yarmouth claims to be the largest such building. The vast Holy Trinity, now Grade I listed, dates from about 1300. At the other end of the dimensional scale, it contains woodwork including his trademark mice-carvings by Robert Mousey Thompson.
Londesborough
Did you know that it was at a great council in Londesborough in 627 that Edwin, King of Northumbria, was persuaded to adopt Christianity and throw off his previous pagan views? According to Bede Edwins high priest, Coifi, spoke in favour of the new religion; and Paulinus explained its principal tenets. The council either took place at the Kings summer encampment, or his royal palace. When Edwin chose to become Christian the nearby temple at Goodmanham was immediately burned.