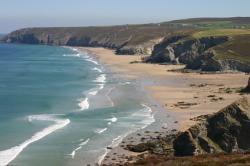 When you think of surfing you can be forgiven for conjuring up images of sun soaked beaches in Hawaii and California, or even imagining a few BayWatch babes running along endless golden beaches. The truth is, of course, that surfing goes on in many places throughout the world. Those places include Britain and the North Cornwall coast has long held the reputation as one of the UKs best surfing areas.

People have been enjoying the surf off the North Cornwall beaches for more than thirty years. It was back in the 1960s that surfing found its way to Cornwall , brought to the UK by lifeguards from Australia. It quickly took off, helped along by the sentiments of the hippy revolution of the time. Cornwall is host to some world class surfing waves, notably at Fistral Beach , Newquay . Also locally known is Porthleven , this beach boasts a powerful wave that draws surfers from far and wide. Newquay has been internationally renowned on the competitive circuit for many years. A myriad of other beaches lay stretched along the picturesque North Cornwall coastline to tempt the surfer ready to stray from Fistral, beaches such as those at both Constantine and Boobies Bay. Both of these stunning bays feature a long arc of soft, golden sand and they both present themselves as one continuous beach at low tide. The picturesque setting is matched by the quality of the surf. Duckpool is another favourite surfing beach. Found at the foot of the Coombe Valley, Duckpool is a steeply shelving, pebbly beach that can be dangerous to swim in and there is no lifeguard on patrol at this beach. However, despite this, it remains a popular beach with surfers as it boasts very good surf in the right conditions. Widemouth Bay is one of the many North Cornwall beaches that has become a special spot in the hearts of surfers. The wide open beaches and natural lie of the land are perfect to produce some of best surf conditions in the UK. Bude bay is made up from a collection of surf-able beaches giving the surfer the choice of many locations dependant upon the conditions. Surfers can generally find a decent swell to surf somewhere along the Bude!

There are many businesses that have grown up around surfing in North Cornwall. Cafes , campsites , hotels and of course surf shops have benefitted from the constant flow of visitors wishing to enjoy Cornwalls surf. A quick search on the Internet reveals a host of surf-shops strung out along the North Cornwall coast. Shops like the Bored Lizard surf store in Bude, established in 2004 by Laurent Calvez, a Frenchman who has been boarding in Cornish waters for many years. Like many of Corwnwalls surf stores, Bored Lizard also have an online shop.

Surfing instruction is just one of the many business that has grown up around surfing in Cornwall. Instructors, such as Pete Ash, have set themselves up in business to pass on their years of experience and competition success to newcomers to surfing. The Raven Surf School in Bude bills itself as one of Europes premier surf academies. It is run by former British, English and European surfing champion Mike Raven and offers all level of surf tuition from beginners to expert. The school even accepts block bookings for groups or even Stag or Hen parties. The lessons are conducted at a variety of beaches: Summerleaze , Crooklets , Widemouth Bay, Polzeath , Harlyn Bay , Newquay - Fistral, Crantock , Watergate Bay , Croyde Bay .

Accommodation for surfers traditionally consists of little more than a bedroll laid out on the bench-seat of a VW split-screen bus. Surfers seeking a little more luxury can avail of the many campsites in North Cornwall. These range from a field with a toilet block on a cliff top, to a luxury holiday site with modern amenities like Budemeadows Holiday Park at Poundstock in Bude. The site even boasts an outdoor heated pool, but no surf to be found on that though. A favourite way to enjoy a stay in North Cornwall without busting the budget is to share a static caravan with friends or families. Sites such as the one at Widemouth Bay Caravan Park offer large, well equipped static caravans for hire and often give direct access to the best surfing beaches!

If youre looking for a little more luxury then choose from one of the many great hotels and B&Bs in North Cornwall, such as the Camelot Hotel at Downs View in Bude. This 3 AA star hotel offers single rooms from £49 per night and prides itself in offering friendly service. Essentially a hotel aimed at the golfing crowd, it is nonetheless ideally placed for surfers. However, perhaps more suited to the surfing sets fashion sense is Elements , a boutique hotel in Bude. It is one of of Cornwall's finest boutique hotels & restaurant; positioned on the wild cliffs of north cornwall. Recently newly redesigned and completely refurbished into a stylish and modern destination, it makes an ideal base for the surfer who is looking for a hotel that has moved with the times. Rooms have wireless internet connections and even PS2s so you can play DVDs or games in your rooms. Rates start at a very reasonable £47.50 for a single. Quad rooms are available for four adults sharing. Other hotels worth considering include the Widemouth Manor at Widemouth Bay, which prides itself on good food, and the seafront Strand Hotel which looks out of Summerleaze beach.